Weekend with children in the hills of the Terre di Castelli

The nature, events and museums of the Terre di Castelli in the province of Modena are the ideal place to spend a weekend with children full of discovery and fun. Even for adults.

A natural habitat ready to amaze. Museums with educational activities. Events perfect for children, so original that they truly capture the imagination. Usually, these special ingredients are a must for organizing a perfect weekend with children. And if we add places that are well-equipped and accessible, the work is done.
In the province of Modena, the Terre di Castelli, between the plains and the foothills, prepares to excite both children and adults with a series of events accompanied by good food. In all seasons, here you can spend a weekend with children without making them bored, but rather offering them activities and visits that will amuse and stimulate them. And, at the same time, will be of interest for parents too.
Ready to discover all the possibilities of a weekend with children in the Terre di Castelli?

It is not true that museums are boring places for children. On the contrary, they can be a great opportunity for constructive fun. The trick, however, is knowing how to present the finds, the objects and the treasures in an appropriate and engaging way. As is the case in Montale, in the municipality of Castelnuovo Rangone, a few kilometers from Modena. Here, Parco Archeologico e Museo all’aperto della Terramara di Montale (The Archeological and Open Air Museum of the Terramara of Montale) is the right place for your children to live one day as archaeologists ... or primitive men!
It is one of the very few "open air" museums in Italy, dedicated to some special finds from the area dating back to the Bronze Age. It was here that some ancient settlements, typical of the Po area, called "terramare" were uncovered: these were houses on stilts planted in the ground and surrounded by ditches. Among other treasures, the museum has a faithful reconstruction of a terramaricolo village transporting younger visitors into a prehistoric world.
But above all, the museum offers an original range of recreational and educational activities for children. Excavation workshops to discover buried treasures, animated and dramatized tales of adventures of the past, workshops to learn how to build small artifacts like the men of the Bronze Age did ... These and other proposals enliven the museum almost every weekend: an unmissable appointment for your weekend with children in the Terre di Castelli.

One day in the Middle Ages

Time travel, however, is not only achieved through museums. Everywhere we can find events that teach us about the past, stimulating the imagination of little ones, preparing for them a day in a dream world. The Terre di Castelli are no exception. Your children can experience a taste of the Middle Ages at the medieval markets of Savignano sul Panaro. If you are in the Terre di Castelli at the end of November, this is another stop to write in your diary for a weekend with children.
The Middle Ages is a fascinating period, often a source of compelling stories and mysterious legends that make it fascinating, almost surreal: that's why kids love it too! And during the medieval markets, Savignano turns into a truly magical place. The whole village, lit only by candles, is filled with people dressed in period clothing, the streets are animated by craft stalls and fun traveling shows, readings and games can be appreciated by young and old. 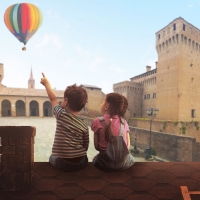 Bambinopoli: a city for children

Ready to discover three magical lands aboard a special train? Every September, Vignola is transformed into a fairytale land offering games, workshops, animated readings and shows, all dedicated to children. It becomes a true city for children. 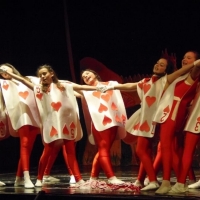 Young actors grow up at the Teatro dei Ragazzi Festival

Every year, between April and May, there is the most eagerly-awaited theatrical appointment in the Terre di Castelli: The Children’s Theatre Festival of Marano sul Panaro. There are three weeks of performances in which children are true protagonists. It is an event that for more than 30 years has brought children to the stage, both to perform and appreciate the efforts of their peers. 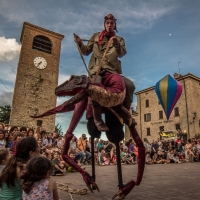 What better event to capture the imagination than Mercurdo, the Market of the Absurd? Every year, the beautiful village of Castelvetro comes alive with the most bizarre shows and art forms, fun for the whole family. And for the little ones, there is the afternoon appointment with Mercurdino, dedicated to story-telling and creativity for children.

In nature with mum and dad

Another healthy and invigorating way to spend a weekend with children in the Terre di Castelli is to immerse yourself in nature. It is good for the body and the spirit, and children will experience a trip out-of -town as a new adventure. Indeed, one of the main beauties of the area is the landscape: gentle hills that rise up to the mountains, natural parks and ... rather strange geological phenomena!
The Regional Park of Sassi di Roccamalatina, in the municipality of Guiglia, is undoubtedly the ideal place to spend a weekend with children in the open. Around its imposing sandstone spiers, a true symbol of the park, we can find marked footpaths for all abilities, even for families. And who knows, perhaps with a little attention, you will be able to spot a specimen of one of the many wild species that inhabit the chestnut groves and the woods of the park, like the peregrine falcon, which nests here every year, the fox or the badger.
If instead you want something "new" and unusual, plan a stop at the Salse di Ospitaletto, in the municipality of Marano sul Panaro. It is one of the few places where it is possible to witness a typical phenomenon of the first Emilian hills, or so-called "salse" (sauces), gas and salt water bubbles that rise to the surface where they become crackling mud cones. A volcanic phenomenon, which proves highly captivating for all ages, in a landscape which could be mistaken for the moon’s surface.

Finally, nature can also be found within the same towns and cities as the Terre di Castelli. The cities of Emilia are famous for their large parks, great for running, playing and picnicking. Among these, Castelnuovo Rangone is certainly worth mentioning, a town with many green areas where you can spend time with children. The most interesting of all is the Collina delle Fiabe in Rio Gamberi Park. Here you can meet Alice in Wonderland, Pinocchio, Little Red Riding Hood and other protagonists of the fairytale world, shaped and designed by the great illustrator Emanuele Luttazzi.

What a beautiful castle!

Let's not forget the main attraction of the Terre di Castelli. The castles, precisely as the name suggests! Ancient fortresses and medieval towers are in fact the protagonists of the territory, keepers of an exciting history, rooted in the past. Like that of Messer Filippo, a nobleman who lived in the sixteenth century, imprisoned - unjustly? Who knows! - in the Torrione (Tower) di Spilamberto.
To discover its history, you can book a tour of the Torrione and the cell that hosted him during his imprisonment, with his messages still engraved on the wall. And where, listening carefully, it is perhaps still possible to hear his moans or to see his ghost ...

Finally, in the Terre di Castelli there is no shortage of events especially for children and teenagers. One of these is Betty B, the festival of comics and children's literature that takes place every year in the municipalities of Savignano sul Panaro and Vignola. Two spring weekends not to be missed if your children are passionate about books and comic stories. The festival offers exhibitions, meetings with authors, illustrators and designers, shows, and, for diehard fans, even a cosplay contest!
In short, no boredom! Whether it's museums, nature or events, the Terre di Castelli always have the answer when it comes to spending a fun and interesting weekend with children and family.