Vignola is the headquarters of the Terre di Castelli Union and, with its 25,000 inhabitants, it is the most populous town. In 1993 it received the title of city. The etymology of its name is linked to wine production: it comes from the Latin "vineola" that refers to the vines. But the main resource is made up of cherries, whose "black" variety is a typical product grown in the territory. Vignola also gave birth to famous people such as the architect Jacopo Barozzi in 1507 and the historian Ludovico Antonio Muratori in 1672.

Despite the Roman name, the area of Vignola has been occupied since ancient times by people such as Etruscans and Galli. In 826 we have the first written testimony regarding the town. In the medieval period Vignola develops as a Castle, built to act as a sentinel on the Via Claudia and the Panaro river. The fief remained under the dominion of the bishop of Modena until 1247 and then passed under the Contrari family, who held it for two centuries, and finally passed under the Boncompagni family. The Fortress that we see today is not the original one, but is the result of a reconstruction of the fifteenth century, when Vignola was under the Contrari family dominion.

of the Town of Vignola! 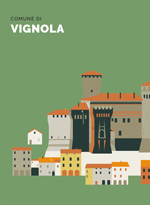