Nestled in the high plains, Castelnuovo Rangone is a town attested since 1025. The ancient castle owned by the Pico della Mirandola, in 1391 it passes under the control of the Rangoni family that keeps it firm for almost four centuries. Its appearance as a fortified medieval village with towers, moats and silent walls, change during the course of the nineteenth century. Interested in the last decades by a strong population growth, the municipality of Castelnuovo Rangone  has now almost 15,000 inhabitants.

Its history can still be read in the monuments, of ancient origin but reworked over the centuries. The parish church, the square tower once part of the Rocca dei Rangoni, the Palazzo Comunale, are all symbols of the city, as well as the famous piglet statue in the central square. The processing of pork meat is in fact the greatest resource - and true genius loci - of Castelnuovo, so much to boast to the municipality a place in the Guinness Book of World Records because of the popular festival of  Superzampone, fixed appointment of every first Sunday in December.

of the Town of Castelnuovo Rangone! 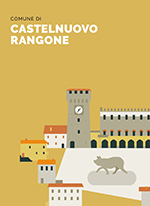