A total of almost 4000 inhabitants for 490 meters of altitude. From the hill on which it stands, Guiglia dominates the whole province of Modena, giving a bird's eye view of the hills and the plain below. Not surprisingly, it is called "the balcony of Emilia". It is presumed that the town of Guiglia has remote origins, but the first document attesting it is dated 890. Later, its Castle falls within the possessions of Matilde di Canossa and then it being disputed between Bologna and Modena.

Among the different lords who dominate Guiglia there are also the Pio da Carpi, who get it in 1405, and the Montecuccoli, which hold it from 1630 until the end of the '700 making it their summer residence. In the Village and its surroundings there are various testimonies of the past: among these, the sixteenth-century Tower of the Public, an integral part of the Castle. The surrounding area is instead very remarkable from the point of view of the landscape and includes the Regional Park of the Sassi di Roccamalatina.

of the Town of Guiglia! 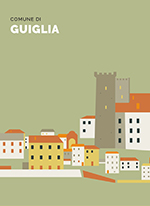