With a population of nearly 10,000, the extension of the town of Savignano sul Panaro covers the climb from the Plains to the early Apennines, ranging from 50 to 350 meters above sea level. This makes its territory very important from an enogastronomical point of view, as mountain specialities such as crescentine and borlenghi mix with the traditions of the flat areas such as balsamic vinegar, nocino (walnuts liqueur) and orchards. Among the latter, Savignano stands out in particular for the cultivation of cacus. All this, without forgetting the wine-making vocation of the territory where eleven types of vines are cultivated, all recognized as DOC.

The municipal territory of Savignano sul Panaro has revealed ancient traces and has been inhabited since the Neolithic period, if not before. In addition to evidence of settlements, the two most important findings were the Venus of Savignano, dating back to the Palaeolithic, and an elephant skeleton dating back to the Pliocene. However, the first written document attesting the settlement is dated 898. Like many castles in the area, the Savignano Castle also passes into the hands of various lords, including the Contrari family and Matilde di Canossa, before following the same fate as Vignola by ending under the control of the Boncompagni in 1577.

of the Town of Savignano sul Panaro! 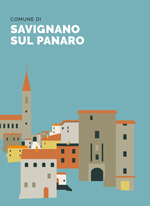