Today inhabited by almost 5,000 people, the town of Marano sul Panaro is mentioned for the first time in 887. There are several stories that tell its foundation, but the most accredited one talks about a settlement with a garrison function founded in the Lombard period. However, it must be remembered that the area of Marano was already inhabited before the prehistoric terramaric civilizations.

From the Middle Ages, the history of Marano merges with that of its Castle, of which we have news starting from 1100. Between 200 and 300 the village is continually contended between Modena and Bologna to finally pass under the control of Guiglia and of the Lordship of the Montecuccoli. Among its places of interest there are numerous naturalistic areas and some ecclesiastical structures of the past. Today the area is mainly known for the processing of pork meat, poultry and its orchards, including the cherry trees, located in the flattest part. 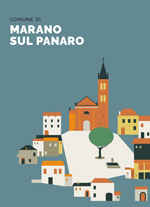