With its 758 meters of altitude, Zocca is the highest municipality of Terre di Castelli. Today it has almost 4000 inhabitants and is known throughout Italy to be the birthplace of rocker Vasco Rossi. Contrary to the other municipalities of the Union, Zocca is not founded in the early Middle Ages. However, during the medieval period, the localities that will later become its hamlets are characterized by the presence of numerous castles disputed between Bologna and Modena.

The foundation of Zocca is later, promoted in 1465 by the Duke and Marquis Borso d'Este. Here, Borso establishes a market to promote trade. At the time, the area is known by the name of "Cocha", which refers to the chestnut strains and  then it will be turned into Zocca. In 1637, it became more important because all the nearby markets are gathered in Zocca. From an administrative point of view, the town will finally become Municipality in 1804 during the Napoleonic domination.

of the Town of Zocca! 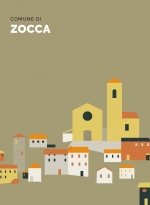