Nestled in the hills, Castelvetro di Modena rhymes with Lambrusco. The vine from which the Grasparossa is produced is in fact the top crop of the territory where the Trebbiano wine is also produced, used in the process to obtain the Traditional Balsamic Vinegar. If today Castelvetro has almost 11,000 inhabitants, the Village has very ancient origins and retains many traces of the past. For this reason, together with the beauty of the surrounding landscapes, the municipality has become a tourist attraction, conquering the Orange Flag of the Touring Club because of the quality of the offer and the reception.

Founded in Etruscan times, Castelvetro di Modena becomes a Roman military garrison and, later, territory submitted to the Nonantola Monastery. Its medieval Castle is attested around the one thousand year and, over three centuries, changes more masters. Among these masters, we remember Matilde di Canossa and the Rangoni marquis who held it from 1326 to 1796. In the Village, between the medieval remains and the historical buildings, stand out the six towers that still characterize the skyline. The particular decoration of the main square dates back to the '70s, with a marble and stone checkerboard pattern.

of the Town of Castelvetro of Modena! 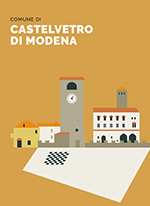