The main archaeological museums of the province of Modena

A journey through time to discover its most ancient past

Discover
08/10/2018
The Terre di Castelli, in the province of Modena, have a long history. Here the prehistoric times have left their mark, offering unique discoveries, which are now displayed and explained in the archaeological museums of the area. May the journey into the past begin!

How often do we say that in Italy it is enough to dig a little to find the evidence of a distant past? Terre di Castelli, the hilly area in the province of Modena extending from Castelnuovo Rangone to Zocca, is no exception. Over the centuries, planned excavations or fortuitous finds have brought to light ancient artifacts, mainly linked to prehistoric times, now displayed and explained in the archaeological museums of the area.

We must make a premise. It is no coincidence that this territory is so rich in remnants. It is in fact a populated area - we could say - since the dawn of time. Moreover, beyond the testimonies related to the first human beings who inhabited it, the findings have also brought back precious animal and mineral fossils, the most ancient ones dating back to the Paleozoic era. A difficult time, even to imagine, which dates back to an interval between 542 and 245 million years ago: even before the appearance of the dinosaurs!

Thanks to numerous findings in the area, historians have been able to reconstruct the most ancient events. Today, the objects and stories that have come to light are available to everyone in the archaeological museums of the Terre di Castelli. Are you ready to begin a journey into this most ancient past?

Paleontology and mineralogy in Vignola

Vignola is famous above all for the IGP cherry and the Rocca that dominates the town. Yet, its history also includes fossils and minerals of great importance, kept at the Civic Museum Augusta Redorici Roffi. The fossil records were found in particular in the valley of the Panaro – the main river that crosses the territory of the Terre di Castelli - and on the first reliefs of the Apennines.

The paleontological path of the museum, which is the section dedicated to fossils, includes some of the oldest specimens of the area, leading us to a quick run-through of the "timeline" of geological eras. Here are preserved findings from the Paleozoic era (the one we have already mentioned, before the dinosaurs), Mesozoic (which includes the famous Jurassic era of the dinosaurs) and Cenozoic which includes, among others, the Pliocene and the Pleistocene. This last period goes between 2 million and 100,000 years ago, and saw the appearance of man on earth. To give another small reference, the Pleistocene ends with the Paleolithic, the earliest Stone Age.

Vignola's findings are therefore testimony of a story so far back in time that it seems unfathomable, yet at the same time is under the eyes of all visitors. Among the showpieces of the collection are the jaws of a Pliocene tapir (aardvark), kept in the "Panaro a Vignola" section, and the rostrum of an ichthyosaur, a large marine reptile from the Mesozoic era. Besides the fossils, let's not forget the minerals: samples of ancient rocks that testify to the geological changes occurred in the area over the millennia.

If you are fascinated by fossils and artifacts, you will hardly remain impassive to the majesty of geology. The sandstone spires of the Parco dei Sassi di Roccamalatina dominate this protected area, full of trails to be discovered, and they have an ancient origin: just think that they formed in the Cretaceous period, 90 million years ago! 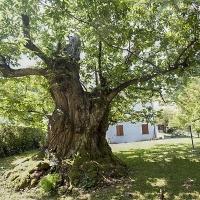 A tree that has seen history pass

Travels in the past are not only done with archeology or paleontology, but also through trees. In Monteombraro di Zocca, a mandatory stop, halfway between history and nature, is the imposing centuries-old chestnut. According to scholars, it is between 600 and 1000 years old and, the legend goes, its foliage has given shade and refreshment to famous people, including Matilde di Canossa. 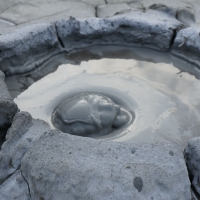 Phenomena of the subsoil

Geological phenomena have always shaped the landscape around us. Some appear to be truly out of the ordinary, such as the "Salse", an original volcanic phenomenon that can be seen in Ospitaletto, in the municipality of Marano sul Panaro. Here, a mixture of salt water and gas bubbles underground until it comes out on the surface, forming peculiar crackling mud cones.

The Elephant and the Venere

Let’s remain a moment in the Pleistocene, more or less 2 million years ago, and move a few kilometers to the other side of the river: Savignano sul Panaro. Here you can visit two particular archaeological museums: the Venere and Elephant museums. Their name could suggest a fable by Aesop, but instead refers to the two main findings in the Modena area.

The protagonist of the Museum of the Elephant is a skeleton of a mammoth, the prehistoric elephant which lived exactly in the Pleistocene. To be precise, the example of Savignano is a female elephant with an imposing size, the only finding of this kind in the whole Po Valley.

But the mammoth is not the only "star" of the place: it must in fact share the spotlight with the Venere of Savignano. To find out what it is, we have to jump forward to the Paleolithic, at the beginning of the Stone Age. In this period, man has already developed precise characteristics: semi-nomadic, living by hunting and gathering and producing stone tools. And yet it leaves to posterity not only arrowheads and chipped stones, but also small artistic artifacts. Among these, the famous "Steatopygian Venus": statuettes depicting women with very marked female attributes. Very voluptuous, we would say today, perhaps a symbol of fertility.

One of the precious prehistoric statuettes was found right in the area of Savignano sul Panaro. Although the original is located at the Pigorini Museum in Rome, the Museum of Venere of Savignano offers us a nice overview of this type of paleolithic representations, emerged from the subsoil in several parts of Europe (the best known is the Austrian Venere of Willendorf ).

Life in a Terramara

If we continue the review of the "timeline", you will remember that after the Paleolithic period it is the turn of the Neolithic, the last phase of the Stone Age. Then, man begins to work the metals: we then speak of the age of copper, bronze and iron. For the next stage, let's stop at the most recent Bronze Age, between 1650 and 1200 BC, and head to Montale, in the municipality of Castelnuovo Rangone.

Here we no longer speak of fossils, tools, minerals or skeletons of prehistoric animals. Here, at the Archaeological Park and Open Air Museum of the Terramara di Montale, we find ourselves in front of a real prehistoric settlement, with the faithful reconstruction of environments and activities of the past. A museum of strong evocative and didactic value enables us to discover how people lived in Emilia during the Bronze Age, rich in educational and recreational activities for children of all ages.
There are two main (and unique) features of the place. The first, it is one of the very few "open air" archaeological museums in Italy. The second, it testifies to a type of prehistoric settlement typical of the Emilia area and southern Lombardia: the Terramara. As the museum tells us, the inhabitants of the Terramare built their houses on elevated platforms, planted in the ground, surrounding the built-up area with embankments and ditches. And it is no coincidence that the museum is built in Montale: right here, in the past, the remains of a terramare village were excavated, such a unique find.

To conclude our journey into the past between the archaeological museums of the Terre di Castelli, we arrive at the Antiquarium of Spilamberto. Here, everything begins thanks to the river Panaro, already a protagonist also in the Civic Museum of Vignola. Over the years, the gravel riverbed has returned finds of all kinds, ranging from the distant Pleistocene until the Roman era through the Bronze Age.

The studies carried out on these findings and the displayed remnants testify the continuity of human settlement in the area. Arrowheads, funerary equipment, graves and burials, Neolithic square mouthed vases, traces of agricultural subdivisions and Roman water wells: these are just some of the wonders here displayed that the earth has returned. Wonders that, once again, show us how today's life is the fruit of a long, mysterious and fascinating journey that still makes our imagination run wild. And the archaeological museums of the Terre di Castelli are the ideal place to daydream a vertiginously distant past, but that we can almost touch thanks to the numerous and unique finds they house.