Villages to visit: many evocative scenes among the hills of Modena

The hills around Modena in the Terre di Castelli are dotted with old villages to visit, rich in stories and traditions waiting to be discovered and enjoyed.

Immersed in the hills of the Terre di Castelli you can find some of the most fascinating old villages in the province of Modena. Medieval castles, un-spoilt nature and food and wine are waiting to be discovered. An ideal destination for lovers of relaxing weekend getaways suitable for all.

An intriguing characteristic of the hills around Modena is surely the presence of many historical villages scattered throughout the area at the foot of the Apennines, where the plain ripples and nature takes complete possession of the landscape. These small towns are a testimony of an ancient bond between man with these places together with a history rich in events handed down the generations. In Terre di Castelli there are some of the most picturesque and scenic corners, making it an ideal destination for a weekend getaway with opportunities for hiking. You will discover villages rich in history and nature together with great food and wine.

Just five kilometers from Castelvetro di Modena, immersed in the vineyards of Lambrusco grasparossa grapes, we find the village of Levizzano Rangone, a place with a thousand-year history and one of the most fascinating and popular villages of the hills around Modena. The first document that speaks of Levizzano was in the year 890, where a defensive tower is mentioned, erected at the time of the last great barbarian invasion, that of the Hungarians. The small village built around what, over the centuries, would become a real castle, after the year 1000 passes over to the family of Matilde di Canossa. The importance of this historical figure in the era of investiture controversy, the conflict between the church and the state over the ability to appoint local church officials, is central to the medieval history of northern Italy and is still linked to the name of the high tower of the Castle of Levizzano: "Torre Matildica".
Not far from the town, along one of the ridges that run along the profile of the hills and among the vineyards there is an ancient place of worship that is a real historical and architectural treasure. It is the oratory of San Michele, said to date back to the twelfth century, when Modena Cathedral (known as the Duomo di Modena) was constructed. Other historians suggest it is even older, dating from the eighth and ninth centuries. The structure preserves the ancient portal with some Romanesque features, while inside a portion of the frescoes inspired by the Gothic paintings of the 1300s can still be seen.

The hill between Castelvetro and Levizzano is also ideal for those who choose to leave the car behind and walk or cycle along one of the many narrow streets and paths. This suggestive place, rich in history, offers a range of hospitality, food and wine. From the restaurants in the village of Levizzano, to the many agriturismi (farmhouse restaurants) that can be found at every vineyard where you discover the best local culinary tradition. 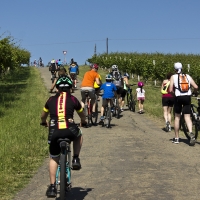 Every year, on the last Sunday of May, Graspalonga Gourmet offers lovers of the great outdoors, cycle enthusiasts and who love great food and wine, a scenic itinerary to discover the hills of Castelvetro with its beautiful vineyards and places of great historical and natural charm.
Also suitable for children and cyclists of all ages and abilities, Graspalonga Gourmet combines the pleasure of cycling with friends in stunning scenery together with a number of mouth-watering breaks at the various agriturismi in the area. 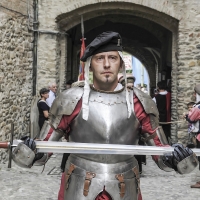 The village of Savignano Alto in September rediscovers its medieval past with the historical performance La Lotta per la spada dei Contrari (the battle for the Contrari sword). The event, which commemorates feudal lord Uguccione Contrari’s taking control of this territory in 1409, gives the opportunity to the six council districts to compete in traditional games and duels. For visitors it is a unique opportunity to see the show of historic period clothes and taste the local food served in the inns that line the streets of the village. 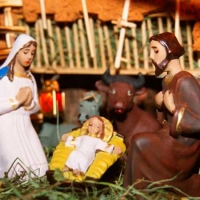 Nativity scenes through the streets of the village of Denzano

The magic of the nativity can be seen in the ancient village of Denzano on the last Sunday of November. In the courtyards and along the streets of the town you can watch the nativity scenes, lit up at dusk to create an even more enchanting atmosphere. Hot chocolate and puppet shows are the attractions dedicated to children, while everyone will enjoy the tasty cod fritters, crescentine (a round bread) and borlenghi (a thin flatbread).

On entering the Terre di Castelli from the east, we find the hill of Savignano, on which the ancient medieval village lies, for the centuries guarding the territorial border between Modena and Bologna, later the lands belonging to Duchy of Este and the Papal State. The dominant position of its defensive buildings shows the strategic and military importance of this outpost, the remains of which are the access gates and part of the walls. Once you have crossed the steep slope that leads to the plain where the mastio (main castle tower) once stood and where in the following centuries the parish church was built, you can enjoy an unrivaled view across the plain between Modena and Bologna and the surrounding hills. It is certainly one of the best viewpoints of this area, so it shouldn’t be missed.
Visitors who want to see the village of Savignano alto and thereby immerse themselves in its timeless atmosphere, can easily arrive by car. The place is well-suited for lovers of walking and trekking, thanks to the many footpaths, the close proximity of Savignano to Vignola, and the cycle and pedestrian routes that run alongside the river Panaro. Savignano also has two stops on the Bologna - Vignola railway.

Panorama, nature and history: the village of Festà

On the border of the territory of Frignano, Festà is a natural meeting point between the historical events of the mountains and the plain. Luxuriant nature and ancient history make it an essential stop-off for tourist guides and locals alike. For those who go up the winding paths that lead from the valley to Festà, it becomes immediately clear why in the Middle Ages this high position almost overlooking the river Panaro was chosen to build a fortified village: from here you can enjoy a stupendous view over the course of the river and the nearest hills with the mountainous landscape in the distance.
Although it was unlikely the primary military intent, today Festà provides visitors with the extraordinary view of the Parco dei Sassi di Roccamalatina (Sassi di Roccamalatina Park), which opens up like a large natural amphitheater on the opposite side of the valley and seemingly in touching distance.
Of the ancient castle of Festà only part of the walls and the tower remain, which in recent times became the bell tower for the parish church. In the Middle Ages the sighting tower system had great strategic value for the Counts of Montecuccoli, the Lords of Frignano, who were able to send signals via the towers and relay what was happening throughout the territory. Festà was central to this system, able to communicate with the fortified villages guarding the mountain on the opposite bank of the river Panaro, villages like Samone and the castle of Montequestiolo.
Festà also plays an important role from an environmental point of view, thanks above all to the wildlife area managed by the Cooperativa Festà Natura Viva. It is an unspoiled well-protected environment that covers an area of over one hundred hectares. Here you can closely observe animals such as deer, fallow deer, roe deer and mouflons; and birds of prey such as the peregrine falcon, buzzard and kestrel. It is possible to follow a circular route inside the area, equipped with observation posts from which you can admire the animals from close up without disturbing them.
One of the best ways to discover Festà and its territory is certainly to set out on one of the many footpaths that run throughout these hills, to enjoy the peace of these places and the panorama that opens onto the valley below. To conclude the visit, you can stop at one of the numerous agriturismi (farmhouse restaurants) or restaurants in the area, where the local food and wine specialties reflect the traditions of the mountains to which Festà has always been a gateway.