Trekking in Modena: excursions in the Terre di Castelli

Feel like trekking? Itineraries to be discovered in Terre di Castelli

If you find peace and relaxation while walking in luxuriant nature among ancient villages, then Terre di Castelli is your ideal place for trekking! Gentle hills, surprising historical places and delicious food and wine that are second to none

A stone's throw from the cities of Modena and Bologna, where the plain ends and meets the Apennines, Terre di Castelli offer different routes and itineraries for all lovers of trekking and outdoor life. Going up the river Panaro and looking at the surrounding landscape, you pass in the space of a few kilometers through an extraordinary variety of landscapes, ranging from a flat valley floor surrounded by orchards, to the first soft hills, ending with a true mountain environment that extends even beyond 900 meters of altitude. An ideal place for every type of trekking and hiking, as well as for Nordic walking and, why not, for itineraries of several days, perhaps stopping for some welcome refreshment in one of the many farms and bed & breakfasts that are open all-year-round.

This scenery, so rich in different landscapes, is perfect for short walks and for longer and more demanding excursions, both offering beautiful unexpected views and opportunties to try the products of the territory. The hills rising to the east and west of the river Panaro hide historic villages that line the bare landscapes of the ravines, the typical clayey reliefs characterized by evocative shapes carved by natural erosion, and the fresh and shaded woods that cover the slopes and rise towards the heart of the Apennines.

Trekking on the hills of Savignano

For those who want to be immediately catapulted into the discovery of these places, the hill of Savignano Alto in the municipality of Savignano sul Panaro is certainly a good starting point. It is an exceptionally panoramic point, from which the view spreads across the entire Modena plain, dominated by the ancient fortified village, behind which opens a verdant succession of woods and vineyards.

On the border with the territory of the Colli Bolognesi (Bologna hills) and at short distance from the Panaro river, Savignano Alto is an ideal starting point to discover the surrounding hills, or the perfect arrival point for light trekking, with walking tours that can start for example from the village of Vignola and continue between the poplars and elder trees along the river, before climbing towards the final destination. The possible itineraries are almost endless: very short, like the ascent along the charming cobblestone road of the castle of Savignano; or as long as the profile of the hill which, from the town of Mulino, reaches the spectacular formations of ravines known as the “Creste di Mostino”. Or, again, immersed in the green, like the two suggestive itineraries known as Via delle Querce, which wind through monumental ancient trees.

If you are curious hunters of hidden treasures, on the opposite bank of the river Panaro, in the territory of the municipality of Marano, the village of Denzano is a truly unique place, all to be discovered. Reachable by car, yet placed at the end of a secondary road, Denzano is a center full of history, where traces of the ancient castle are still visible.

It is really the ideal place for a day of trekking on the first hill of Modena, thanks to its panoramic location[1], right at the junction of paths and dirt roads that cross the watersheds at the source of several small streams. For those who want to enjoy long walks through the oak woods and the profile of the ravines, Denzano can also be reached on foot from the villages of Castelvetro and Marano. Extremely suggestive is also the short path that continues along the ridge that leads to the hill of the Tre Croci (Three Crosses), from which you can enjoy a view that sweeps over the distant plains, always remaining immersed in nature. 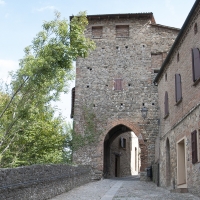 The castle of Savignano Alto

The castle of Savignano Alto appears for the first time in documents dated around the year 1000. Built on a hill that was already known and inhabited in Roman times, the fortification, located on the border between the Modena domains and those of the rival Bologna, had an important defensive and sighting function.

The "pine forest" of Denzano

In the valley of the Rio Faellano, which descends from Denzano towards Marano and the river Panaro, there is a vast pine forest, unique in its kind for these altitudes and probable heritage of an ancient era in which the climate of the area was significantly stiffer. Protected to the north and south by the narrow slopes, the pine forest contrasts with the clayey crests of the nearby ravines 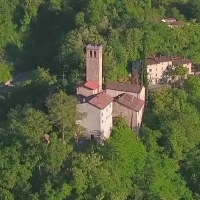 For those venturing to discover the park of the Sassi di Roccamalatina, the small village of Castellino delle Formiche is a stop not to be missed. Reachable along the paths and the narrow roads that descend from the Sassi to the valley, Castellino delle Formiche still preserves traces of the ancient castle, whose tower has been transformed over the centuries into the church's bell tower

At the Ospitale di San Giacomo, today you can visit the Museum of Chestnut and Borlengo. While the first marks the link between the inhabitants of these places and one of the most important resources both of food and of materials of the mountain environment, the Museum of Borlengo introduces visitors to one of the leading gastronomic preparations of the territory, with courses to learn the complex art of making a simple but delicious food.

Below, above and around the Sassi di Roccamalatina

One of the privileged places for trekking in Modena and surroundings is certainly the Sassi di Roccamalatina park. A truly unique place, this park owes its peculiar reputation to the particular rock formation, known precisely as the "Sassi", which, breaking away from the eastern side of the Panaro valley, rise towards the sky, bending in the direction of the river. Immersed in a high hill environment, the valleys and the surrounding woods are the ideal refuge for different animal species, from roe deer to fox, from hedgehogs to wild boar. The territory is often dominated from above by the flight of birds of prey, including hawks and buzzards, who have elected the Sassi di Roccamalatina to their point of observation and hunting.

The park offers numerous itineraries, some of which reach the top of the Sassi - but only with the accompaniment of a guide. Not recommended for those suffering from vertigo, the climb is not really difficult and allows you to admire a truly breathtaking view.

But this extraordinary place is also rich in ancient settlements, farming villages, mills and quiet farmhouses that are revealed only to those who walk along the paths in the shade of oak and chestnut trees. From wherever you look at, the Sassi di Roccamalatina Park is truly a little paradise for lovers of nature and trekking.

Trekking in Modena, in the green Apennines

In the highest part of the territory of Terre di Castelli, the woods often open into green meadows that mark the beginning of a mountain landscape typical of the Apennines. Here, in the Municipality of Zocca, overlooking the hamlet of Lame and on the road that connects the Panaro valley to the upper Reno valley, is Monte San Giacomo, under whose top stands the ancient Ospitale di San Giacomo, which is traced back to 1186! The structure, originally created to accommodate the pilgrims who crossed the Modenese mountain, is now home to an excellent hostel and to the Museum of Chestnut and Borlengo,thus following a tradition of hospitality and warmth rooted in these places. Easily reachable by car and at the same time ideal for short walks, Monte San Giacomo is well suited to be a must for lovers of long treks. In fact, the numerous paths that go into the mountains and the surrounding woods can be followed in every season; starting from the village of Zocca or from one of the many hamlets and boroughs that wind along its slopes.

It is enough to move a few kilometers away from the roads and the large towns of the Padana plain, for Terre di Castelli to reveal an ideal territory for trekking and excursions, a place rich in nature and traditions, where the eye can range on landscapes that inspire relaxation and desire to discover. All you have to do is to prepare the backpack, put on a pair of comfortable shoes and venture out to discover this amazing territory, step by step.