The Traditional Balsamic Vinegar of Modena has a special bond with the Terre di Castelli, where it sinks its roots and where it lives through centuries-old customs

The Terre di Castelli are the place of choice for the product internationally recognized as an excellence of Modena's enogastronomy: the Traditional Balsamic Vinegar. The Consorteria of Spilamberto still today protects its authenticity, while every local producer keeps secular secrets handed down from generation to generation.

Few products among the Italian food and wine excellences famous worldwide can boast a charm and a mystery comparable to those surrounding the Traditional Balsamic Vinegar of Modena: prince of the table and a true "black gold" of taste. A dark, dense and precious liquid, jealously guarded in ampoules that make it even more intriguing and "magical", the Traditional Balsamic Vinegar of Modena is the result of a history that goes back over the centuries and that in the Terre di Castelli is preserved and handed down with passion through the generations.

It is precisely here that the Consorteria of Traditional Balsamic Vinegar is located. This establishes the production disciplinary; here the care of the barrels and the work to be done in the vinegar industry are serious matters, ground for fierce disputes and challenges between experts, as well as for great pride for the producers.

For those looking for great quality food and wine, for those who love discovering authentic flavours and getting to know the stories, the people, the territory, it is essential to reach and touch firsthand the places and experiences that, in the Terre di Castelli, make the Traditional Balsamic Vinegar not only a excellence product of the best Italy has to offer on the table, but also and above all a looking glass on an ancient passion and culture.

The history of Traditional Balsamic Vinegar sinks its roots over the centuries and is linked to the vast diffusion that the products referred to by the name of "vinegars" had in ancient times. In a largely vanished past, a great variety of vinegars were used as sauces and condiments, and were often produced from different ingredients (not only grapes, but also apples, for example) and using different spices. Over time came the fame of the "vinegars alla Modenese," which were already known in the nineteenth century well beyond the boundaries of the Duchy of Modena, back then ruled by the Estensi and corresponding more or less to the current provinces of Modena and Reggio Emilia. It is therefore evident how this territory already had a particular predisposition and instinct all its own towards these products with an inebriating taste, sweet and savory at once, round and pungent. The Duke himself led the vinegar charge, converting the attics of his buildings into vinegar cellars. It’s in his kitchens that the "balsamic vinegar" is mentioned for the first time, in a register of the ducal cellars dated 1747.

The Traditional Balsamic Vinegar of Modena, obtained from the aging in wooden barrels of the cooked must of grapes of Lambrusco and Trebbiano, thus became a symbol of the territory and a heritage cultivated and guarded by its inhabitants. If in fact nobles and aristocrats immediately wanted to emulate the Duke and his court in terms of knowing how to eat, the conduction of the vinegar cellar soon became a passion and a source of pride for the majority of families, as well as a way to build a real heritage. 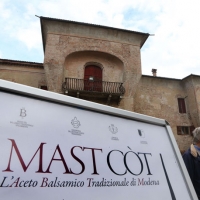 Mast Cot, an event that recalls the ancient ritual of boiling the must in the open and that becomes a pleasant excuse to enhance and promote agricultural production and local products.

The Marrone Chestnut Festival of Zocca

For over forty years Zocca has been hosting The Marrone Chestnut Festival, an event dedicated to the most famous fruit of the autumn season and a fundamental element of the mountain civilization. Inside the festival you can discover and taste the main food and wine specialties of the area and enjoy the last days of the season in the open air, walking through the streets of the centre between the markets, surrounded by forests and mountains. 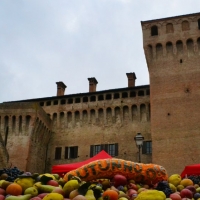 Autumn in Vignola, where the city of cherries offers many opportunities to taste typical specialties at the food stands which fill the medieval old town;

If the attics of the Duke are mentioned in the history books for their production of balsamic vinegar, it is however the vineyards surrounding the city of Modena that have been the origin of this product over the centuries. The cultivation of truly peculiar grapes, such as the sweet Lambrusco and Trebbiano, has characterised the hills and high plains at the foot of Emilia since the Roman era. In a time when the plain was often subject to floods, thus unsuitable for the cultivation of the grapevine, it is here that this culture took root. The same Roman origin of the name Vignola (Vineola, small vine) is linked to this remote past.

And so, every town and every village of the Terre di Castelli has become, with the passing of the centuries, the place of choice for the culture of Traditional Balsamic Vinegar, a product indissolubly linked to this territory. Walking with the nose aloft through the streets of the centre of Spilamberto or Castelvetro, Vignola or Castelnuovo, you can be sure that between the attics and dormer windows the balsamic aroma is strong and penetrating.

Some of the most important moments of the production of Traditional Balsamic Vinegar are linked to the passing of time and seasons. Every autumn sees the ritual of boiling the must, once made in every country house inside large copper pots placed on a slow flame. The cooked must is then put to rest in the first of a series of barrels that in every attic is called a battery. The barrels get smaller and smaller as the content is transferred every year to the next. Until the last cask, when the aged product comes out, full of aromatic scents and inebriating fragrances. Today this ritual is re-evoked in Spilamberto by an event dedicated to the culture of Traditional Balsamic Vinegar. This event aptly named Mast Cot, "cooked must", is held in the first weeks of October.

If time is the great alchemist slowly refining the taste of balsamic vinegar, on the other hand each producer follows strict family traditions ranging from the positioning of the vinegar cellar, to determining the right times and the right quantities for the fundamental operation of the transfers (or passages) of the contents from one cask to the other. To establish the link with this territory are then precisely the varieties of wood used for the production of barrels, such as oak, cherry, chestnut, ash, mulberry, juniper: each is a fundamental element of the environment and of the landscape of this countryside, and each one is fundamental in bringing structure and aroma to Traditional Balsamic Vinegar.

The Consorteria of Traditional Balsamic Vinegar was formed in 1967, right in the heart of the Terre di Castelli, in Spilamberto. In fact, at the height of the economic boom and industrial development of our country, on one side the ancient local traditions risked to slowly disappear, while on the other the market, now a mass one, started to be flooded with products that, name aside, little had to do with the true Traditional Balsamic Vinegar. The Consorteria thus became a point of reference in the conservation and protection of this tradition, compiling its production disciplinary and spreading this culture for the benefit of old and new producers. Today this story is preserved in Spilamberto inside the Museum of Traditional Balsamic Vinegar, a visit that any real passionate admirer of this product cannot afford to miss.