Lambrusco Grasparossa: the events in the province of Modena

Lambrusco Grasparossa is one of the leading products of the Terre di Castelli: light, fresh, sparkling, excellent paired with the tasty dishes of Modena. A wine with an ancient history, protagonist of events and festivals that celebrate its importance.

Ruby red, almost purple color. "Lively and evanescent" froth. Bubbles that tickle the palate. If you have tasted a good glass of Lambrusco Grasparossa you will surely remember these characteristics. Tell the truth: you were pleasantly surprised, weren’t you?

Lambrusco Grasparossa is the variety of Lambrusco native to the Terre di Castelli, in the province of Modena, in particular of the grapevines on the hills of Castelvetro di Modena. It is not alone: the Lambrusco family also includes the Sorbara (lighter and more acidic), the Salamino di Santa Croce and the Lambrusco di Modena.

One thing, however, unites all these products: for a long time in the collective imagination they have been judged wines of little prestige. So sparkling and light, Lambrusco has little to do with the body and robustness of wines considered more valuable. Yet over time, common opinion has changed.

The revenge of sparkling wine

Let's go back to the good glass of Lambrusco Grasparossa with which we started. Imagine sitting at a table spread with the most popular specialties of the hills of Modena: cold cuts, gnocco and crescentine, first courses of fresh pasta, zampone ... your mouth is already watering, we know! Try to pair it with one of those famous full-bodied wines we mentioned, and you will not be so satisfied. On the contrary, you will feel rather weighed down.

The Modenese specialties are already full-bodied, sapid, not really dietary: that's why Lambrusco - obviously Grasparossa, if you're in the hills - is the right pairing to enjoy them to the fullest. Its bubbles, its mildly acidic freshness, its natural froth help to "cleanse the mouth" from the rich tones of the local dishes in a winning combination.

In addition, the Lambrusco Grasparossa, darker and sweeter than the varieties of the plains, is also called "amabile" (lovely): it is impossible not to be passionate about a wine that has love even in its name! Today, thanks to its unique characteristics, it has been so re-evaluated as to become an international success. And the best opportunities to taste it, are always in its places of origin: the hills of Castelvetro di Modena and the Terre di Castelli. 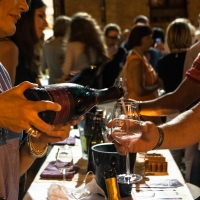 Goblets of stars (an event in Castelvetro)

Every moment is good to taste Lambrusco Grasparossa, even during the night of falling stars. Every 10th August, in the hills of Castelvetro di Modena, a tasting of the territory paired with Lambrusco awaits you accompanied by guides and experienced amateur astronomers: what better way to express a wish? 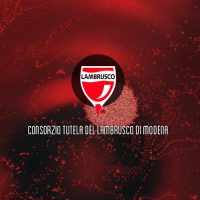 Lambrusco is a DOC (Denomination of Controlled Origin) wine. Agricultural entrepreneurs, wineries and producers of Lambrusco from the Modenese area have joined the Consortium to protect, enhance and promote this special product of the territory in its varieties: Grasparossa, Sorbara, Salamino Santa Croce and Modena. 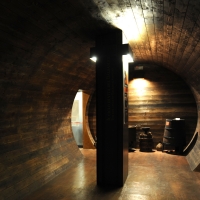 Did you know that there is a bit of Lambrusco also in Traditional Balsamic Vinegar? Well, yes: the precious product is born by cooking the must of Lambrusco and Trebbiano, strictly from Modena. And this is just one of the curiosities that can be discovered in the museum dedicated to it by Spilamberto, home of the Consorteria of Traditional Balsamic Vinegar.

In Castelvetro, harvest is a serious matter. For over 50 years, the homeland of Lambrusco Grasparossa has been celebrating the harvest period every September with the Sagra dell’Uva e Lambrusco Grasparossa (The Grape and Lambrusco Grasparossa Festival) The historic village is in itself suggestive, overlooking the hills lined with grapevines that give rise to the loveliest sparkle that there is, and on this occasion is animated by events for all, not only for connoisseurs.

There are tastings of Lambrusco Grasparossa in the medieval village and on farms, as well as meetings with producers and food stands, the best place to appreciate the magical combination with Modena's delicacies. And then shows, music, visits in the numerous cellars of the territory, until the most awaited moment of the party: the parade of the floats of Bacchus through the streets of the village, not to be missed!

Summer and spring in the vineyard

September is the month of the wine par excellence, we agree, but in the Terre di Castelli every season is good to celebrate the Lambrusco Grasparossa. At the end of June, under the warm sun, the greenest hills ever is the best time for a picnic in the vineyards. Can it be? Of course yes: La Vie en Rosé is the event designed specifically for this. The vineyards of Castelvetro are ready to welcome you with special tastings of the Rosati di Lambrusco, cool and refreshing, barefoot on the grass: a very special contact with taste and nature.

The grapevines of Lambrusco Grasparossa also dot the hills of Savignano sul Panaro, a place where eleven types of DOC ("Controlled Origin Denomination") wine are produced, including Riesling Italico and Pignoletto. In fact, just like Castelvetro, the village of Savignano and its surroundings are the protagonists of many events dedicated to viticulture specialties. One above all, the Magnalonga: it is a nature walk with gastronomic stops, musical entertainment and a wine tasting at the wine producers - Lambrusco Grasparossa yes, but not only - in its daytime version, in May, and nighttime, in July.

The millennial history of a "wild" wine

The success enjoyed today by Lambrusco pays homage to its ancient history. Did you know that the Romans drank a wine that can be considered in all respects the ancestor of Lambrusco? The name itself derives from the Latin word labrusca, used to indicate a type of grapevine that at the time grew spontaneously on the perimeter of the fields. A wild plant, therefore, which took root very well in the Modena area and that some identify as the original grapevine of our Lambrusco.

The phases of Lambrusco production have followed the classic succession for centuries. From the harvest we pass to the crushing of the grapes, then to the de-stemming to separate the stalks (unless you want to produce a good rosé of Lambrusco), then on to the pressing and maceration of the skins to give the ruby colour. What characterises Lambrusco - and gives it that sparkling pinch we like so much - is a step in the next phase, fermentation. Not one, but two, of which the second takes place in an autoclave. Here, the sugars of the must become carbon dioxide and alcohol, giving the future wine its classic bubbles.

After fermentation, it goes to racking - a sort of "correction" of the wine - to finally land at the bottling. Once aged properly, our Lambrusco is ready to be sold and tasted. Maybe during a nice toast in the hills of Modena.