Passing time together, in thought and beauty

The Terre di Castelli in the province of Modena propose a series cultural events throughout the year, to pass a meaningful time together.

The beauty of Italy is that, wherever you go, not only do you eat well but you also find museums, monuments and works of art that testify the history of the place and maintain, a sense of the brilliance that made our country among the most beautiful in the world. Even the Terre di Castelli – as the name suggests: the Lands of Castles, are no exception. History aside, this corner of the province of Modena is characterized by a fervent activity that manifests a rich calendar of cultural events covering almost the whole year and the entire territory of the eight towns that make up this community.

Literature, music, art, entertainment, performance... There is practically nothing missing in the range of experiences to be enjoyed in the villages of the Terre di Castelli, which have chosen culture as the engine of social aggregation and to promote sustainable, intelligent and quality tourism. So, here are some tips you should note down for your next free weekend.

Terre di Castelli: in the name of music!

Terre di Castelli is home to many great musical talents. It is not a coincidence as it finds itself halfway between Modena and Bologna, two of the most "musical" cities, and may it be another coincidence that among the municipalities of this territory there is Zocca, the birthplace of the most known Italian singer: Vasco Rossi. Music, regardless of the genre, is very important in these parts, and in fact there is no festival or event without at least one artist or band performing. All the main cultural events of the territory, even when they focus on other disciplines, offer concerts of all kinds.

The great enthusiasm for music in these parts surely inspired Jazz in’It festival held in Vignola since 1989, which hosts the main Italian and international protagonists of jazz music, attracting an audience far beyond the local and regional. Over the years on the stage, set up in Piazza dei Contrari, in the shadow of the Rocca di Vignola, has seen artists such as Steve Lacy, Mal Waldron, Richard Galliano, Enrico Rava, Paolo Fresu, Antonello Salis, Fabrizio Bosso, Rita Marcotulli, Stefano Bollani and many others.

Jazz in'It is a festival the gives due consideration to exploring the roots of the genre together with openness to more contemporary styles, as well as a splendid excuse to visit the Terre di Castelli in June, when the festival is in full swing, in pleasant conjunction with the period of the cherries of Vignola. 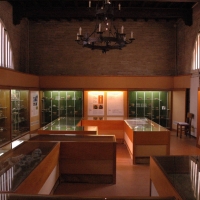 Digging deep into the history

Discover the culture of the Terre di Castelli in museums such as Antiquarium, the archaeological museum of Spilamberto, a fascinating exhibition of finds that testify the existence of ancient human settlements on the banks of the river Panaro. From the traces of Pleistocene deposits to the post-classical finds, this museum tells of the most ancient existence of man in these territories. 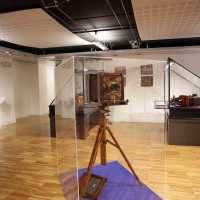 At the roots of the seventh art

From a generous donation of Antonio Marmi, a citizen of Vignola and collector of cinematographic machines, the Museum of Cinema Marmi is truly a unique place. Located inside the Ermanno Fabbri Theatre of Vignola, it is an exhibition of inventions over the centuries which create the illusion of the movement of images: wonderful objects that continue to fascinate. 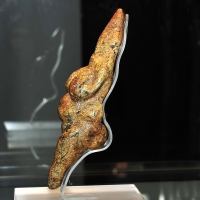 The mammoth and the lucky charm statue

Savignano sul Panaro was the site of two historical archaeological finds, now celebrated and exhibited in its museums. The Museum of the Elephant preserves the remains of the skeleton of a female mammoth which lived about 2 million years ago, while the Museum of Venere houses a reproduction of the ancient statuette with feminine features, which in the Paleolithic era had a propitiatory function. Both museums offer educational visits to fully appreciate these precious finds.

Emilia, land of writers, where the visionary fantasy of poets and novelists of this land has left a legacy - and continues today to produce - pages that are the heritage of all readers. And what better way to celebrate this talent than a rich program of literary cultural events?

The Zocca Giovani Award, for example, has earned itself over the years the reputation of a event that discovers the new literary talent.

Dedicated to young Italian writers, the prize puts selected novels, from the best under 35 authors, before a jury of well-known residents of Zocca: if you are curious to know their names, visit the Award website and discover them. We are sure you have already guessed one!

Another festival dedicated to poetry and poets every September since 2005 which includes all the towns of the Terre di Castelli is Poesia Festival. It is among the major events dedicated to contemporary poetry where you can enjoy many free readings, shows, concerts, performances, art exhibitions to celebrate the art of speech and the poets of today and yesterday. For a week Poesia Festival brings together a vast territory in a festive atmosphere and a love for poetry: well worth a visit. And also to nourish the spirit and body with the tastes and flavors of autumn.

To young acting talents there is the Festival del Teatro dei Ragazzi in Marano sul Panaro, a permanent presence for over 30 years among one of the main national events that see children of all ages become histrionic interpreters of performances staged in front of an audience of children and adults. Every year, theatrical groups from all over Italy converge here at the foot of the Modena Apennines. They are excited, determined, nervous even fierce for the great opportunity to perform in front of a warm audience and, after many editions, even very demanding!

The programme of cultural events in the Terre di Castelli celebrate the history of the territory with articulate and creative shows to liven up the summer evenings.

In the truly suggestive setting of the village of Castelvetro di Modena, September is the month of the Dama Vivente (Living Checkers) and, every second year, of the Festa a Castello. This event celebrates the sixteenth-century splendor of this centre, when Torquato Tasso stayed on the Modena hills, welcomed with sumptuous celebrations from the Marquises Rangoni, lords of the territory. Period costumes, reenactments and banquets bring to life the experience of a small court of Renaissance Italy and kick off the other celebrations of the month of September, such as those consecrated to Bacchus of the Festival of Grape and Lambrusco Grasparossa.

In summer, however, the charming Piazza dei Contrari in Vignola becomes the meeting place for lovers of music, theatre and entertainment in general: the Etra Festival programme never disappoints, with its concerts, recitals and performances for audiences of all kinds and tastes, to spend pleasant evenings together in the name of sophisticated entertainment and beauty. A trademark for this territory.