The cherries of Vignola are an excellence of the enogastronomy and agriculture of the Terre di Castelli: discover everything about this unmissable delight!

Delicious, rich in history and super-healthy, the cherries of Vignola are the queens of the agricultural production in the Terre di Castelli. Their cultivation has deeply marked the landscape of this territory, and annual parties and events celebrating them are waiting to be discovered.

The cherries of Vignola are certainly a product whose link with the territory has made it a true symbol of tradition, renowned and appreciated for its quality. Its cultivation has marked the landscape, the work of man, the life of families and communities in a decisive and marked way. Today, thanks to the constant work of producers, companies and institutions, this product is also protected at European level thanks to the Protected Geographical Indication, which covers the different varieties produced in 28 municipalities between the provinces of Modena and Bologna, gathered under the brand Ciliegia di Vignola IGP. And the Terre di Castelli are at the heart of this territory and this production. In spring, from the Rocca di Vignola through the valley of the Panaro river, we can see the white of cherry blossoms and, with the arrival of summer, the fruits are ready to be tasted fresh, just picked, or to be transformed into tasty preparations .

The territory and the origins of the cultivation of cherries

The cherries of Vignola owe their uniqueness to the peculiarity of the territory in which they are grown: nestled between the first hill of the Emilia Apennines and the beginning of the plain. This foothills area is characterized by a largely clayey soil that, together with the deposits left by the Panaro river, has been crucial for the successful growing of cherries over the centuries. Still today, some of the most characteristic farms are those located in the immediate vicinity of the river, in the municipalities of Marano, Vignola, Savignano and Spilamberto.

The cultivation of cherries once had a completely different role from the current one. In fact, in other times, when the countryside had to produce directly what was needed to support the villages and cities, other productions were privileged here: the importance of the vineyard had been known since ancient times, while in the area of Vignola great value went to the cultivation of apples: fruits easy to transport and which could last a long time before being consumed.

However, as well as being suitable for this territory, the cherries also had another important advantage: their harvest took place at a completely different time of the year thereby not putting it in competition with other crops. In fact, if vineyards and apple orchards occupied the end of summer and autumn, the cherry reached maturity with the end of spring. It was therefore a welcome first fruit that everyone could enjoy without losing sight of the other works in the fields.

The cherries of Vignola become famous

With the nineteenth century, in a world where society and business were rapidly evolving, the cherries of Vignola emerged from the shadows to become the spearhead of local agricultural production. At this time, thanks to increasingly efficient transport and an increasingly complex economy, those specialties unique to a territory were those which attracted more trade and profits. And so, if grapes and apples grew in abundance in many regions of Italy, the same cannot be said for cherries. And the cherries of Vignola were really special and unique and therefore in great demand.

The diffusion of cherry trees throughout the territory was accompanied by the formation of a category of increasingly specialized farmers and workers. At that time, the plants were much larger than the current ones and could easily exceed fifteen meters in height. Entire families specialized in the use of very high wooden ladders, equipped with hooks, ropes and the all-important wicker baskets for harvesting the fruit. It was a job that could also prove very risky. A curious testimony of this can be found in the various ex votos (ceremonies of thanks) held at the Sanctuary of the Madonna della Pieve di Vignola, which depict miraculous rescues from disastrous falls, whose tribute was paid to the benevolent intercession of the Virgin Mary.

The arrival of the railway was finally the new revolution that allowed the cherries of Vignola to reach a once unimaginable public: not only the wholesalers of Milan, Rome or Turin, but also the markets of France and Germany. 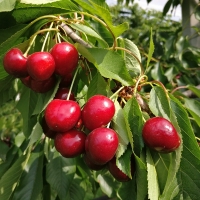 The best occasion to get to know and taste the Cherries of Vignola is certainly Vignola è Tempo di Ciliegie, the event dedicated to the red fruit par excellence. During the weekends at the turn of May and June, the center of Vignola arranges stands where you can buy cherries directly from producers. A calendar rich in initiatives for all tastes completes what is an unmissable event. 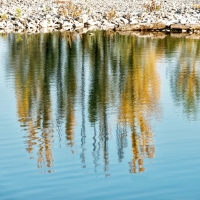 For the lovers of the open air and of the itineraries to be covered on foot or by bicycle, the Trail Natura-Sole is an ideal opportunity to discover the expanses of orchards where the cherries of Vignola are grown along the course of the river Panaro. The path, a true oasis of peace surrounded by greenery, winds from Spilamberto to Casona di Marano, passing right under the Rocca di Vignola. 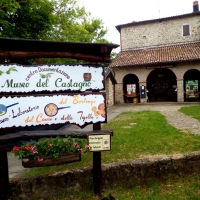 Museum of Chestnut and Borlengo

In the mountain territory of the Terre di Castelli, the cultivation of chestnut trees has played a role in many aspects similar to that of the cherry tree for the plain and the hill. Today the Museum of Chestnut and Borlengo di Zocca, near the ancient Ospitale of San Giacomo, is the ideal place to discover the ancient traditions of the inhabitants of these mountains and to discover some of their most delicious food and wine specialties.

Where to buy and how to taste the cherries of Vignola

Today the cherries of Vignola are represented by different cultivars that in this territory have found the ideal environment to best express their organoleptic characteristics and their taste. The most typical and totally unique variety is certainly the famous Moretta di Vignola, very sweet and juicy, with a particularly dark color. The cherries Nero di Vignola and Anellone are also traditional. Today, varieties like the duroni Ferrovia, Bigarreau and the more recent Georgia are also very popular.

There are two special dates every year when the cherries of Vignola take center-stage. Between the end of March and the month of April we witness the marvelous cherry blossom, which transforms the Panaro valley into a unique and unmissable spectacle. During the Festival of the Cherry Blossoms in this period, Vignola organises a parade of flower floats and markets of typical products including crafts, local food and wine.

The weeks between the end of May and the beginning of June, when the fruits are ripe and ready to be harvested, are instead the moment of Vignola è Tempo di Ciliegie. This initiative is entirely dedicated to the red fruit, all its variety and in all the ways in which it is possible to savor it. A trip to Vignola during these days is an excellent opportunity to stock up on cherries to take home and to taste all the main traditional products in one of the many stands and restaurants.

Throughout the period of the harvest it is also possible to buy directly from the farmers, in the numerous sales points set up directly in the farms and along the roads. If you find yourself far from Vignola, just search for the boxes and baskets with the Consorzio della Ciliegia di Vignola IGP logo that you can find at the fruit stands or at the supermarket counters.

Savor the cherries of Vignola all year long

An unfortunate fact of cherries is that they are only in season for a few weeks a year. But for this precise reason a tasty alternative can be found in the delicious cherry jams, often prepared directly by many small producers and available in shops as well as in many farms in the area. And when it comes to jams, the imagination in the kitchen really has no limits. Suffice to say that during Vignola è tempo di Ciliegie, the master confectioners and bakers of Vignola join forces to make a cherry jam tart of record size, which is cut and served to those present.

And there is more. The success of the cherries of Vignola has led to the spread of the typical preservation of freshly picked fruits in alcohol, thus creating the famous cherries in alcohol, a truly sumptuous delicacy, ideal for decorating and garnishing ice-creams and desserts.

Not only are the cherries of Vignola a product to be discovered and enjoyed, but they are an  excellent excuse to come in person to explore this territory and discover its traditions and flavors. And if, as often happens, one cherry leads to another, do not worry: with their content of antioxidants, vitamins and minerals, Morette and duroni are one of healthiest gluttonies!