Apennines hiking: itineraries for everyone in the Terre di Castelli

Just a few kilometres from the Po Valley, the Terre di Castelli are ideal for hiking in surroundings rich in nature and tradition. Put on some comfortable walking shoes and follow us on this voyage of discovery.

If you like walking along unsurfaced tracks to explore places you would never have dreamed of visiting, Apennines hiking is for you.

The Apennines are a mountain chain running for about 1,200 km down the Italian peninsula. To the north-west they are joined to the Ligurian Alps and to the south-west they reach Reggio Calabria, the coastal city situated on the toe of the boot of Italy.

The Terre di Castelli are also located on the edge of the Apennines, in the Modena foothills of the mountain range, and host a network of hiking and cycle paths to be explored unaccompanied (they are well sign-posted) or with a guide for the full historical and cultural experience.

These nature trails are suitable for everyone, for slow hiking in a gently rolling landscape, with plenty of opportunities to sample the local cuisine.

From the Sassi di Roccamalatina to Zocca

Surrounded by nature, beyond the Romanesque churches and castles, lies the Sassi di Roccamalatina Regional Park. This unspoiled landscape offers breath-taking views from its amazing rock formations. From this point a number of trails lead off into the splendid countryside, filled with culture and food and wine.

Guard posts, houses and historic villages seem to blend in perfectly with this fairy-tale landscape. They were built to protect the local inhabitants from any type of attack, while allowing them to keep an eye on one another. Small villages where time has stopped and where every breath seems filled with history.

The medieval village of Samone, situated inside the Municipality of Guiglia, was first mentioned in writing in the 11th century. Its buildings have remained unaltered since those days, which is why it has attracted so many famous international artists wanting to get away from the bustle of everyday life. 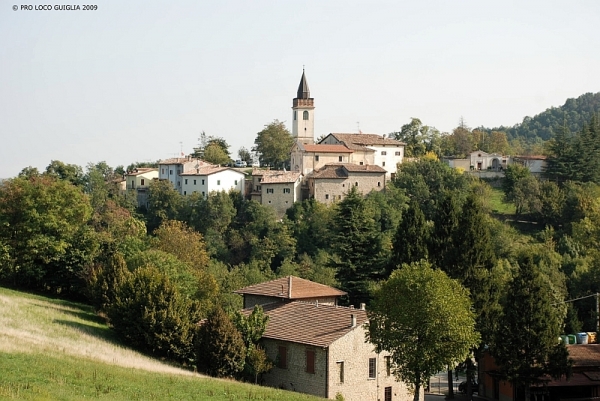 In the distance, Samone is first seen as a white bell-tower rising from the woods lining the River Panaro. Then gradually the village appears in all its glory, its spiral-shaped defence works still intact. A place that has preserved its medieval charm right down to the present day.

The village is accessed through the arched passageway of a 14th-century tower house. Inside, a number of frescoes illustrate the history of the noble Pio family of Carpi.

Samone also hosts the Permanent Exhibition of the Tigella, a fireproof terracotta disk traditionally used to cook crescentine, a type of small mountain focaccia made of wheat or chestnut flour. The exhibition bears witness to the culture and values of the area. Using functioning scale models, the museum tour shows the different cycles involved in the manufacture of the utensils and food.

From here the route leads to Castellino delle Formiche, with its tower that seems to rise straight out of the rock. The medieval castle was first the home of the noble Malatigni family and later of a member of the Montecuccoli family, before becoming the town-hall of Guiglia.

Its 13th-century walls have remained unchanged, with lancet-arched gateways dating from later centuries. The present-day Church of Santo Stefano, situated inside the castle walls, houses a baptismal font dating from 1662.

From here the route continues to Zocca through peaceful landscape and gentle climbs and descents.

Zocca is a mountain municipality situated exactly on the ridge that divides the Panaro river valley from the Reno and Samoggia river valleys. An ideal position that makes the town a perfect place to seek refuge from the summer heat. At 759 metres, it is the highest municipality in the Terre di Castelli.

It was founded in 1465, when the Duke and Marquess Borso d’Este set up a market to promote trade. And as business prospered, so did the settlement around the market, until it grew into the town we know today.

The oldest building still standing in the town is the 13th-century Torre Rangoni. It is part of the ancient fortress, the ruined drawbridge of which can still be seen. Another unmissable visit is to the Chestnut and Borlengo Museum, two essential ingredients of the history of the Apennines. The museum offers visitors the chance to rediscover ancient mountain traditions, even making borlenghi (lard-filled crepes) for themselves. 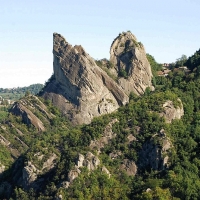 The park stretches from the Terre di Castelli over 2,300 hectares, most of which between the municipalities of Zocca, Guiglia and Marano sul Panaro. The area is a wonderful example of Apennine landscape, with hills and mountains rising to 808 metres above sea-level. Don’t miss the rocky sandstone pinnacles surrounded by chestnut forests, clayey soils, caves and craters. 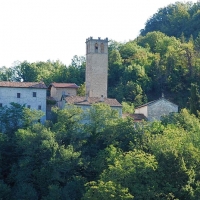 Located in Guiglia, the “Castle of the Ants” probably takes its name from a mistranslation of the medieval term Castrum Formigis, or “castle inspiring awe”. Castellino delle Formiche is a settlement built around the original fortress and surrounded by woods and fields. The ancient tower and the Church devoted to Saints Stephan and Lawrence overlook the square. 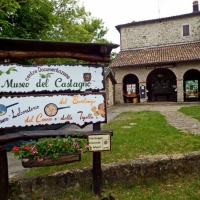 Housed inside the ancient hospital (a hostel), the museum is devoted to two of the area’s specialities: the chestnuts from the local woods and the borlengo, a thin and crisp crepe. These are two essential items in local cuisine. The museum offers a guide to recognising local plant and animal life and allows visitors to make borlenghi for themselves. 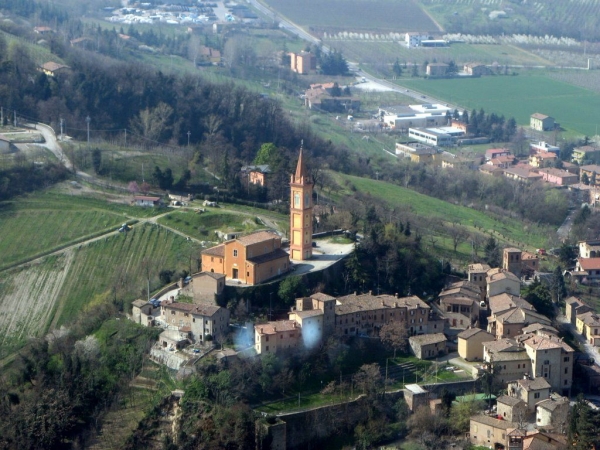 Apart from the Sassi di Roccamalatina, another famous viewing point in the foothills of the Apennines is the hilltop of Savignano Alto with its ancient fortified settlement.

Savignano sul Panaro has very ancient origins, with archaeological finds in the area pointing to a significant Etruscan presence. Already famous in 1500 for the quality of its wines, now the village is the starting point of a network of wonderful nature trails and cycle paths between woods and vineyards along the River Panaro.

Slow hikers can set out from nearby village of Vignola to continue between elder and poplar trees. You can choose between short trails, such as the climb along the picturesque cobbled path to the Castle of Savignano, or longer trails such as Via delle Querce (oak trail).

A singular aspect of this itinerary winding over the hills is the dense concentration of huge old oak trees. Visitors can walk or cycle among these natural monuments to discover the local area.

The historic village of Denzano is located on a broom-covered hillside on the opposite bank of the river. The settlement was almost certainly founded in the Byzantine era and from the 15th to the 18th century was the dominion of the Rangoni family. All that remains of the castle that once stood here is a square tower with an ogee-arched terracotta gateway.

Mineralogy enthusiasts will be interested to learn that almost perfectly formed gypsum crystals can be found on the hillside. 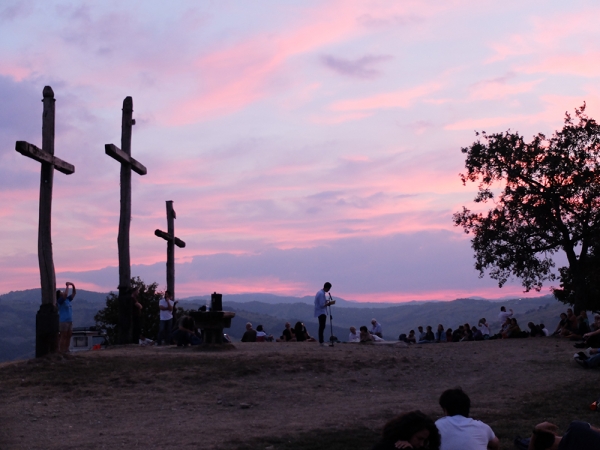 Thanks to its scenic position, Denzano is a perfect base for hiking. Trails and unsurfaced tracks wind over the watershed from which a number of small streams flow downhill. The trails leading here from the nearby towns of Castelvetro and Marano are also worth exploring, while the short walk to the Hill of the Tre Croci is very atmospheric.

Traditional dishes of the Terre di Castelli area include borlenghi filled with cunza, a mixture of pork lard, rosemary, garlic, and Parmesan cheese. A type of local street food, together with the crescentina (or tigella) and chestnuts. The first is a round flatbread about 15 centimetres across, cut in half and filled with cured meats, cheese and other local specialities. The chestnuts, on the other hand, are mostly sold on the street in autumn roasted.

There are also events and popular festivals aplenty at which to sample these delicious specialities, such as the Crescentina and Mountain Food Festival or the Chestnut Festival held annually in Zocca.